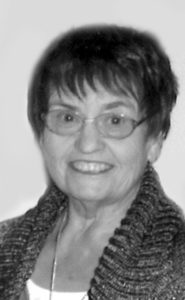 Mrs. Shari Parton of Lethbridge, beloved wife of Ronald “Ron” Parton, passed away at the South Health Campus in Calgary on Sunday, June 18, 2017 at the age of 77 years. Shari was born February 16, 1940 to Clarence & Edna Sherwood in Pocatello, Idaho. She graduated from Pocatello High in 1958. She later graduated from Idaho State University in 1962 with a degree in education, which was her passion. Working with children for most of her career as a first grade teacher. She was one of the first teachers to work at Park Meadows Elementary in 1982, and retired from there in 2000. She and Ron Parton were married August 27, 1961. Together they had four children Jeff, Jennie, Julie & Jennifer. Besides her loving husband Ron, she is survived by her three daughters; her son; and her twelve grandchildren. She was predeceased by her parents Clarence & Edna; brother Jim Sherwood; and granddaughter Katelyn Needham. A Funeral Service will be held at 1:00pm on Friday, June 23, 2017 at MARTIN BROTHERS RIVERVIEW CHAPEL, 610 4 Street, South, Lethbridge, AB., with Pastor Doug MacArthur officiating.