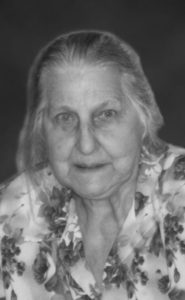 MRS. SELMA MOHRMANN of Shaughnessy, beloved wife of Willy, passed away surrounded by family on June 23, 2017 at the age of 87 years.

Selma was born in Emiluwke, Ukraine on August 11, 1929 and immigrated to Canada in 1953. She resided near Picture Butte upon arriving in Canada. Selma worked hard all her life. She began hoeing sugar beets when she arrived and continued to work for farmers to help get her family established in their new home. Once she and Willy settled their own homestead, Selma helped with farm work, attended to her children and did whatever else needed to be done. She was always working. Selma enjoyed gardening and, in particular, was known for the large potato fields she tended by hand; she was not afraid to get her hands dirty. She was known for her baking and seemed to enjoy her time in the kitchen. Selma also enjoyed German music, sewing and crocheting, and spending time with her family, especially her grandchildren. Everything Selma did showed her strength and determination. In her life, Selma overcame many adversities and, in her later years, she endured numerous difficult back surgeries.

She was predeceased by her parents, daughter Christel, sister-in-law Elsa, granddaughter Candace and her beloved husband Willy.

Interment will follow at the Mountain View Cemetery, Lethbridge.