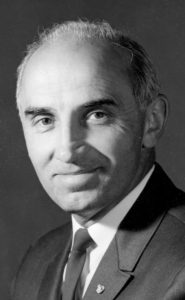 LEO LAMAR DAVIDSON, husband and life long companion of Agnes Davidson, passed away peacefully on Wednesday, June 28, in Lethbridge. In addition to his extended family, Leo is survived by his wife, Agnes, and their five children: Julie Fairbanks of Calgary, Alberta; Doug Davidson of Ashburn, Virginia; Jim Davidson of Bellevue, Washington; Colleen Low of Arlington, Texas; and Mark Davidson of Edmonton Alberta. Leo was born in 1925 in Cardston, Alberta, the son of Orvy and Annie Davidson, and grew up in Mountain View. He was preceded by his brothers, Ned, Don and Dahl, and his sisters, Nina Wood and Ida McMullin. His surviving sister, Unabel Peck, resides in Murray, Utah. Leo served as a full time missionary for the LDS Church in Australia from 1946 to 1948. In 1949 Leo and Agnes Sloan were married in the Cardston Temple. Their 68th wedding anniversary was just a few days ago. For more than a decade Leo was co-owner and operator with Bill Sloan of Sloan’s Hardware & Western Wear store in Cardston. In 1962, the family moved to Edmonton and Leo began a new career with Farmer’s & Merchants Trust Company. At Farmer’s & Merchants and a series of succeeding companies, Leo remained in the finance business for the rest of his professional career. In 1963, the family moved to Lethbridge where Leo opened a branch for Farmer’s & Merchants as the new regional manager. He thoroughly enjoyed driving around the country meeting farmers and ranchers and assisting them with their financing needs. He had faith in honest working people. It is reported that over three decades in the finance business, every loan he made was fully repaid. In 1967, Leo was called as Bishop of the Lethbridge 3rd Ward of the LDS Church, which met initially in the 10th Avenue building and later in the new Stake Center on Scenic Drive. He served in that capacity for seven years, presiding over a large, active congregation. In 1972, the family moved from the Lakeview area to the partially-restored, 100-year old Perry house on an acreage south of town. Restoration of the dilapidated house was a major construction and renovation project that extended over many years. The work was done largely by Leo and Agnes with help from family members and generous friends. In 1975, Leo was ordained as a Patriarch in the LDS Church. He served actively as a Patriarch for three decades, providing patriarchal blessings to hundreds of faithful youth and adults. Leo and Agnes served two full time missions for the LDS Church. They spent two years in Durban, South Africa and Reunion and another two years in Madagascar. These were highlights in a life time of selfless service. Leo loved to sing and had a excellent ear for harmony. He is well remembered as part of the Temple City Four, a men’s quartet in Cardston in the 1950’s that performed at numerous church and civic events in southern Alberta. During those same years, Leo taught himself to play the string bass and played and sang in a dance band that performed at various locations, including the old Waterton dance hall. Leo was a faithful husband and devoted to his family. He is much loved by his children, daughters and son in law, and grandchildren. He was truly a gentle, patient, humble man. He was a friend to all and harbored animosity toward none. He is missed. We are grateful that because of the Lord’s atoning sacrifice and the ordinances and covenants of the Gospel we can look forward to a glorious reunion in the eternities. The funeral service will be held Wednesday, July 5, 2017 at 11:00 am at The Church of Jesus Christ of Latter-day Saints, FAIRMONT WARD CHAPEL, 205 Fairmont Boulevard South, Lethbridge, Alberta. Prior to the funeral service, there will be a viewing and family greeting in the Relief Society Room from 10:00 to 10:45 am. After the funeral service, interment will take place at the cemetery in Mountain View, Alberta, followed by a family dinner at the LDS chapel in Mountain View.

One Condolence for “DAVIDSON, Leo”