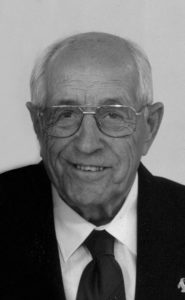 Mr. Edward (Ed) Pommen, of Lethbridge, passed away at St. Therese Villa on June 25th, 2017 at the age of 99. He is survived by his beloved wife of 75 years, Margaret; his children Norma (Lenard) Rasmussen, Judy (William) Logan, Gordon (Diane) Pommen and Joan Pommen; his grandchildren Craig (Mandy), Karyn, Stacey (James), Jennifer (Sheldon), Courtney and 7 great-grandchildren. He was predeceased by his 8 siblings and his grandson, Kevin Rasmussen. Ed was born in 1918 on a homestead in the County of Eriksdale near Moosehorn, Manitoba. The fourth child of nine in the family of George and Olga Pommen, he grew up on farms in Manitoba and Saskatchewan. At thirteen he was driving teams of horses and working the fields on his own. He never lost his love of the land and farm animals. During the Dirty 30’s, with his brothers Bill and Harvey, he rode the rails to Alberta to seek his fortune in the irrigated sugar beet fields near Stirling. He later found employment with the Reservoir Farm Company of Raymond. During this time, he met Margaret Clark, the oldest of 10, whom he married in 1941, and they settled on a farm east of Raymond to raise their family. As well as farming his own land, Ed continued with Reservoir Farms and became the general manager, a position he held for 35 years. This farming company owned several farms plus feedlots. Ed had to continually learn about the cattle industry, sheep farming and how to fix broken machinery with wire and binder twine. As well as overseeing this multi-million dollar operation, he volunteered his time with the United Church in Raymond and helped form a community Boy Scouts group which he supported for many years. Growing up in the Depression he appreciated the need to give a helping hand and the value of a dollar. During his years as Farm Manager, Ed was involved in sponsoring over 100 families wanting to immigrate to Canada. These families were given housing and employment and Ed was responsible for helping them settle into their new country. Lasting friendships were formed. In 1983 Ed and Margaret bought a lot in Tudor Estates in Lethbridge, built a house and moved from the farm. Ed then had more time to work in his small vegetable garden, play crib at the Seniors’ Centre and attend the Lutheran Church of the Good Shepherd. He even tried his hand at golf. Throughout his busy life Ed consistently thanked God for his many blessings. His achievements were many but his greatest pride was in his family whom he dearly loved. Spending time with his grandchildren was a great joy. Ed’s stories and guidance will be missed by all. Family and Friends are invited to pay their respects between 7:00pm and 8:00pm on Tuesday, July 4, 2017 at the MARTIN BROTHERS RIVERVIEW CHAPEL 610 4 Street S., Lethbridge, AB. A Celebration of Life will be held at 2:00pm on Wednesday, July 5, 2017 at the LUTHERAN CHURCH OF THE GOOD SHEPHERD, 2406 11 Avenue S., Lethbridge, AB with Pastor Reg Berg, officiating. A Private family interment will be held prior in the Mountain View Cemetery. In lieu of flowers, donations can be made to St. Therese Villa, 253 Southgate Blvd., S., Lethbridge, AB., T1K 2S1, the Salvation Army, 9618 101st “A” Ave., NW., Edmonton, AB., T5H 0C7, or a charity of your choice.