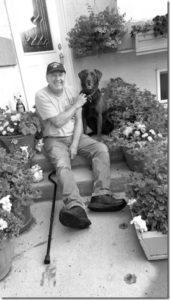 It is with heartfelt sadness that Mr. Gerard Thom, of Lethbridge, loving husband of Shelley Thom and devoted father of Adam Thom, passed Thursday June 27, 2017 after a courageous battle with ALS at the age of 57. Gerard leaves behind a legacy of strength, courage and humbleness as he fought with this horrific illness. His strong Catholic faith brought him through this long journey and his gentle soul now rests with our heavenly Father where he is at peace and no longer suffering. He was forced to retire early from Davis Pontiac after 17 years and 35 years as a technician from General Motors. He sadly had to leave behind his friends and family at Davis Pontiac. Gerard had great admiration for the Davis Family and highly respected their loyalty to their staff. Gerard’s greatest joys were watching his son Adam play hockey, traveling with hockey and taking his family fishing and camping. When Gerard was a teenager, he taught himself to play the piano which grew into a passion for music. He loved to compose pieces for his family. Gerard leaves behind his mother and father in law – Bill and Angie Randa; his brother in law Gary Randa (Suzanne Althen); his sister Colleen Thom from Kamloops; sister Loretta (Don) Bruchet from Lethbridge; five brothers from Cranbrook George (Buffy), Les, Rick (Joanne), Pat (Beth) and Ron (Wendy); two brothers from Lethbridge Rob (Karen) and Joe (Lori), as well as numerous loving nephews and nieces. He was predeceased by his parents John and Alice Thom. A Prayer Service (vigil rites) will be held at 7:00pm on Thursday, June 29, 2017 at the MARTIN BROTHERS RIVERVIEW CHAPEL, 610 4 Street S., Lethbridge, Alberta. A Funeral Mass will be held at 1:00pm on Friday, June 30, 2017 at the OUR LADY OF THE ASSUMPTION CATHOLIC CHURCH, 2405 12 Avenue S., Lethbridge, Alberta, with Father Kevin Tumback, celebrant. For those who wish, memorial donations in Gerard’s name may be made to the ALS Society of Alberta, 7874 – 10 Street NE Calgary, Alberta, T2E 8W1.