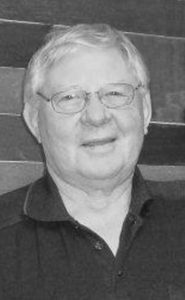 The family of WILLIAM “BILL” CHARLES SCOTT is saddened to announce his sudden passing on Tuesday, July 4, 2017 at the age of 76.

Left to mourn is his wife of 54 years, Carol; children Shelley (Bill) and Chris; and grandchildren Erica, David and Curtis. He is also survived by his sister Sandra, brother-in-law Harvey (Shirley), sister-in-law Judy, brother Rick Rogers and brother-in-law Bill Roffel, cousins Isla, Gail, and Andy, as well as nieces and nephews.

He was predeceased by his sister Flo and his adoptive parents, Charles and Ella Scott, and his brothers-in-law Mel and Garry. Bill loved his family more than anything.

Bill was born December 9, 1940 and was raised in Strathmore. His career in banking took him to Cranbrook, Calgary, Lacombe, Edmonton, Grande Prairie and finally to Lethbridge where he resided since 1979. In Lethbridge, he worked for BDC and later for The Mortgage Centre.

Bill enjoyed volunteering his time as a hockey referee at all levels, and at the Birds of Prey Centre. He was known as a hard worker and loved by everyone he met for his friendly, easy-going manner. His family teased him about his many “retirements,” since he was still working at the time of his passing, as an in-house mortgage signer for First Canadian Title, a position he enjoyed because he met so many people.

Carol is grateful for the last trip she and Bill took together, in May of this year, to visit Sandra on Vancouver Island, to Vancouver to visit their granddaughter Erica, and to Cranbrook to visit Judy, Harvey and Shirley. There were so many good times spent with family.

A cat-lover, gardener, and a great reader and crossword-solver, Bill will be dearly missed.

A Service of Remembrance will be held at CORNERSTONE FUNERAL HOME, 2800 – Mayor Magrath Drive South, Lethbridge, on Saturday, July 8th at 11:00 A.M. A time of fellowship & refreshments will follow.