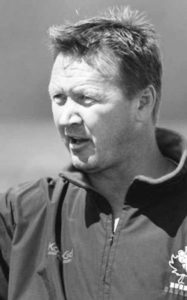 All of Ric’s family, friends, including the international rugby community are mourning Ric’s loss, including the countless number of players he coached or mentored during his coaching career. Ric held head coaching positions with the Canadian National Women’s Team, the Canadian National Men’s Team, the U.S. Women’s 7’s team, and most recently, the University of Lethbridge Pronghorns Women’s team. Ric or “Sluggo” as he was affectionately known, was an inspiration to all who knew him. He was more than just a great coach, Ric was a great friend, son, brother, husband and father. A truly amazing man.

A Celebration of Ric’s Life will be held Monday, July 10 at 1:00 p.m. at the Venue at the River Cree Resort, 300 East Lapotac Boulevard, corner of Whitemud Drive and Winterburn Road, Enoch, AB. Come as you are – shoes optional! In lieu of other tributes, donations may be made to the Scholarship Fund in Ric’s name at the University of Lethbridge, http://gohorns.ca/sluggo.