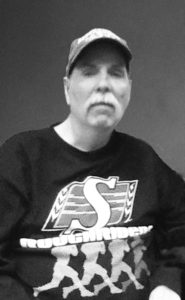 It is with great sadness that we say good-bye to our father, brother, grandfather & uncle on July 1, 2017.

Garry was born, the youngest of 6 children in Lethbridge, AB to Harold & Ruth Vosburgh.

He had an extreme love of music and enjoyed playing the occasion game of crib & on-line backgammon and was a devoted Saskatchewan Roughrider fan.

When his health allowed him, he enjoyed his weekly breakfast trips to Denny’s or the casino with a little gambling thrown in.

Garry was predeceased by his parents Ruth & Harold, his brother Don, brother-in-law Bill Moulton and his wife Cathie.

We wish to thank the staff of Legacy Lodge for the wonderful care that Garry received while he resided there.

If so desired, donations may be made in Garry’s honour to Muscular Dystrophy.

At Garry’s request there will be no funeral.