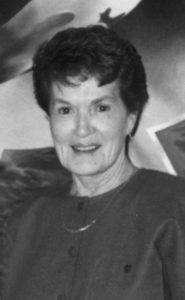 EUNICE SARAH COLEMAN, of Lethbridge, passed away at the Chinook Regional Hospital on Tuesday, July 4, 2017 at the age of 88 years.

She will be lovingly remembered by her son, Reg Coleman of Calgary, daughters Linda (Robert) Smith of Lethbridge and Nancy Coleman (Richard Lancaster) of Lethbridge as well as three grandchildren. She is also survived by many nieces, nephews, cousins and friends.

Eunice was born to Hugh and Rose McGillivray on April 15th, 1929 in Calgary. She was the last of five children, a singleton following two sets of twins, much to the relief of her mother! Eunice was a member of St. Joseph’s Parish in Calgary and graduated from St. Mary’s High School, where she was active in the drama club and served as co-editor of the yearbook.

Her independent spirit led to a career in banking and a move to Vancouver, where she met and later married George Coleman. Three children later, the family moved to Winnipeg, then Calgary and finally settled in Lethbridge, where Eunice began her position in the Finance Department of the Agriculture Canada Research Station. She worked there for 17 years with a close knit group who enjoyed socializing together, even after her retirement in 1994. Following her retirement, she took an active role in the care and upbringing of her three grandchildren.

Eunice was a natural beauty and believed in the importance of being properly attired. She was a highly organized person and kept meticulous records throughout her life. Eunice had a strong quiet faith and prayed daily. She had an incredibly strong spirit and met numerous health issues with a tenacity that few could believe. Eunice was an independent and private person with a strong sense of duty. She was known for her dry sense of humour, and strong conviction to speak the truth, regardless of the consequences!

Eunice loved to travel and particularly enjoyed Mexico, where she went several times with family. Recently she was able to reconnect with cousins in Prince Edward Island, a trip in memory of the one taken 30 years ago with her two sisters and their beloved mother. Eunice loved music, dancing and connecting with friends and family, especially her grandchildren. But her greatest joy was being a mother, a role she took great pride in and excelled at.

In memory of Eunice, donations may be made to the Jack Ady Cancer Centre, c/o the Chinook Regional Hospital Foundation, 960 – 19 Street South, Lethbridge, AB, T1J 1W5.