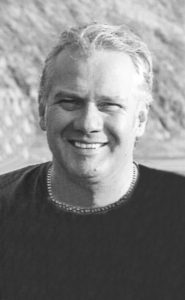 Ronnie is lovingly remembered by his companion Terry Law, daughter, Dana Miller of Edmonton, son, Cole Turpin Miller of Edmonton, brother Kevin Miller of Red Deer, sister, Christy (Brian) Chollak of Lethbridge, his parents, Ronald and Peggy Miller of Coalhurst, many aunts, uncles & cousins. Ronnie is also survived by his dear friends Darren Flint, Jeff Hamilton and Ken McGregor. He was predeceased by all his grandparents, two uncles and one cousin.

His love of life and people touched the lives of all those who knew Ronnie. He was a compassionate, thoughtful, and honourable man who loved his family and animal companions. Ronnie’s quiet courage, strength of spirit, creativity and sense of humor will be carried forward by those who knew and loved him.

Dana and Cole were the love of Ronnie’s life who loved and admired him for his humour, respect and generous spirit. Ronnie’s greatest passions other than his children were the New York Giant’s and his Motorcycle.

A Service of Remembrance will be held at CORNERSTONE FUNERAL HOME, 2800 – Mayor Magrath Drive South, Lethbridge, on Thursday, July 13, 2017 at 1:00 P.M., with Deacon Cliff Bogdan officiating.

One Condolence for “MILLER, Ronnie”