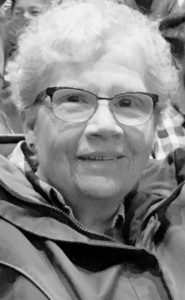 It is with great sadness that we announce the passing of our Mom, Grandma and Grammy, Christine (Schumers) Sparkes, at St. Michael’s Palliative Care Centre on Monday, July 10 at the age of 69 years. She leaves behind her children Jenny (Cliff) and Mike (Shannon); grandchildren, Steve (Angela), Dustin, Josephine and Madeline; and Great-Grandchildren, Ila and Zoey. Chris was born on December 27, 1947 in Raymond, Alberta. She spent her early years on the family farm near Welling, and then in Calgary for Junior and Senior high school. She met Wilf while he was at SAIT and she was at the University of Calgary. They married in 1970 and, after a few moves, ended up in Picture Butte in 1976 where they decided to raise their family. Chris chose to be a stay-at-home mom; going to work outside the home only after Jenny graduated from high school. She worked at Bert’s Ag Foods in Picture Butte, which she loved and where she stayed until she retired. She moved to Lethbridge shortly after Wilf passed away, and was close to the mall so she could walk whenever the shopping bug hit. Chris never complained. Even when cancer came a second time and was asked how she felt, the reply was always ‘better than yesterday’. Our time was cut way too short. We’ll miss her desperately. Chris was predeceased by her husband, Wilf, parents Mary and Louis, step-brother Bart, and nephews Tyler and Leland. Our family would like to thank the Palliative Care team at St Mike’s for the excellent care Chris received in her last days. An open house celebration of life will be held at the COMMUNITY SENIOR CENTRE (607 Hwy Ave) in Picture Butte on Thursday, July 13 from 11:00 to 1:00 pm; dress casual. Memorial donations can be made in Chris’s name to the Canadian Cancer Society.