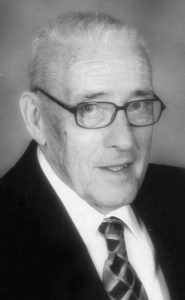 Mr. Cecil Beaudry of Lethbridge, beloved husband of Betty Beaudry, passed away peacefully on Tuesday, July 11, 2017 at the age of 85 years. Cecil was born in Altamont, Manitoba in 1932 but was raised and educated in Somerset, Manitoba. Cecil married his high school sweetheart Betty, on July 1, 1953 and was a very loving husband. They just celebrated their 64th wedding anniversary. He enjoyed numerous sports, but hockey was his passion! Cecil spent his whole career in the meat industry, having apprenticed with his father in-law Freddie. He went on to work in the meat processing plants in Winnipeg, North Battleford, Lethbridge and Calgary. In his spare time and retirement, Cecil and Betty enjoyed travelling. He also enjoyed his garden, yard and the kitchen where he created the most amazing desserts. (Banana split cake and marshmallows!!) Besides his loving wife Betty, Cecil is survived by his daughter Debbie Hofrichter of Lethbridge, Alberta; grandchildren Danielle (Barry Robertson) Pageot of Trochu, Alberta, Troy (Lindsay) Pageot of Lethbridge, Alberta; great-grandchildren Chase Gustman of Claresholm, Alberta, Delena Gustman of Claresholm, Alberta; brother Norman (Carol) Beaudry of Winnepeg, Manitoba; as well as numerous nieces, nephews and their families. Besides his parents Leon and Antoinette Beaudry, Cecil was predeceased by his parents in-law Fred and Mabel Lusignan; sister Bella Labossiere; sister in-law Donna Tyson; brother in-law Claud Tyson and son in-law Jeff Hofrichter. A Private Family gathering will be held at a later date.