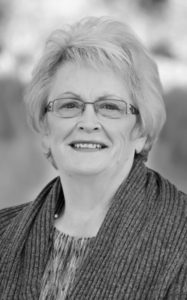 CAROL BLUMEL WRIGHT beloved wife of the late Robert (Bob) Royce Wright passed away peacefully on Tuesday July 11, 2017 at the Raymond General Hospital at the age of 75.

Carol was born in Magrath, Alberta, the fourth child to Horace Frederick Blumel and Ella Toomer. Carol grew up in Magrath and lived there most of her life. She was the one that finally slowed down Bob and married him in September 1967 and shortly thereafter moved to Provo, Utah for Bob to complete an Education degree. They lived in Calgary for a few years while Bob taught school then they moved back to Magrath to be closer to take care of their mothers. Carol worked in the local bank for many years monitoring her four children’s lives through concerned citizen’s reports. Her entire life was spent dedicated to her family, friends and community.

Carol is survived by her four greatest accomplishments David (Tricia) of Taber, Laura Jane of Lethbridge, Suzanne Proctor of Lethbridge, and Ken (Natalie) of Claresholm. The greatest enjoyment she had was her 10 grand children Royce, Genna, Dani and Darci Wright, Ben and Ella Proctor, Jackson, Nate, Zak and Easton Wright. She did her best to keep up with all family and sporting events and earned the name of GoGo Gram. Her whistle from the sidelines will be greatly missed.

The Funeral Service will be held at The Church of Jesus Christ of Latter-day Saints, GARDEN PLACE CHAPEL, on Monday, July 17th, 2017 at 10:00 a.m.

One Condolence for “WRIGHT, Carol”