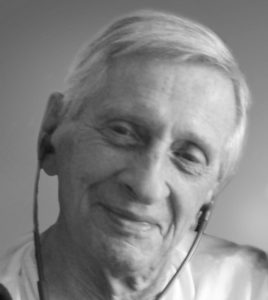 KENNETH “KEN” DOUGLAS MARCHANT, passed away peacefully with his family surrounding him, at the Chinook Regional Hospital, on Monday, July 17, 2017 at the age of 90 years.

He was predeceased by his father & mother, Phillip & Helen Marchant as well as his older brother Bob Marchant and mother of his eldest children, Lydia Marchant.

Dad was born & raised in Saskatoon, SK, till he moved to Prince Albert, SK., where he married his first wife Lydia and had his two eldest children, Lori and Doug. During this time, he worked as the express messenger at the CN Railway. He was promoted to freight manager, where he moved with his second wife Marion & son Greg to Gillam, Manitoba. It was in Gillam that decided to change careers & enter the hospitality industry as the manager of the Gillam Hotel & 400 seat Beverage room at Kettle Rapids Camp. Later on, he was transferred to Winnipeg, Manitoba, where his youngest daughter Jennifer was born. After four years in Winnipeg, he moved to Lethbridge, AB with Marion, Greg and Jennifer.

Kommix Components was where he began working in sales after the move to Lethbridge. Following his career at Kommix Components, he decided to go back to the hospitality industry with the Sandman Inn & the Park Plaza Hotel. His final years before his retirement were spent working at National Neon as the sales manager.

Dad lived a very full life; he was a charter member of the Gillam Lions Club & enjoyed scoring hat tricks with the Old Timers Hockey League. He loved to dress well & was known for his ugly ties & fancy suits. Once the family moved to Lethbridge, he became serious about golf; he was a member of the Lethbridge Country Club, where he spent most of his retirement. He even had a “Hole in One” on the 5th hole. Dad was most proud of the life he & Marion built in Lethbridge; they had a beautiful family home with a swimming pool for all the family to enjoy. Family & golf were his greatest joys. He & Marion took many golf trips to Kalispell, Montana, and toured BC to Campbell River. Once his health prevented him from golfing, he spent his time playing crib at the Seniors Centre, people watching at the Casino and making meaningful friendships that he cherished with the other tenants of Sommerset House.

We certainly learned a lot about our dad & grandpa in the last six weeks. He told us all about his childhood, sports days, careers and what made him tick. He was surrounded by his greatest life accomplishments, his children, grandchildren and his love Marion. We had lots of laughs and cried lots of tears but most of all, filled his heart with joy and love, and his belly full of pies, bread pudding, milkshakes, ribs and macaroni with cheese and tomatoes, even a Caesar & a glass of Red Wine. Sassy, Classy & a little smart assy, that’s Ken. Rest easy Kodge… we love you & miss you.

A very heartfelt thank you to the doctors & nursing staff of 4B at the Chinook Regional Hospital for taking such amazing care of our dad & grandpa.

At Dad’s request, a private family memorial will be held at a later date.