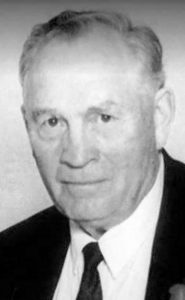 Charles Edgar “Ed” French, beloved husband of Margaret Faye French, passed away peacefully on his 91st birthday, July 21, 2017 in Cardston, Alberta. Ed was the fifth child of eleven, born to Charles Osborne French and Bessie Francell Olsen on July 21, 1926 in Cardston, Alberta. He was raised on the family’s ranch at Hill Spring, Alberta. There he learned the value of hard work as the family worked together to provide for themselves. At a young age, he drove teams of horses, milked cows, cared for livestock and ploughed the land. He attended grade school initially at Park Bend and finished his high school education in Hill Spring. Ed attended the University of Alberta and graduated in May of 1950 with a Bachelor of Science in Agriculture. During his university experience, he excelled in the sport of boxing and won many trophies and championships, including Alberta and Canadian Amateur boxing championships in the Light Heavy Weight Class. He won most of his fights by a knockout, usually in the first round. In 1952, he qualified for the Canadian Olympic Boxing team to participate in the Olympic Games in Helsinki, Finland. Instead, that same year he received a call to serve a mission for the Church of Jesus Christ of Latter-Day Saints in Helsinki, Finland. He served there from 1952 to 1955 and developed lifelong friendships. On August 29, 1956, he married Margaret Faye Duell, a registered nurse from New Dayton, in the Cardston, Alberta temple. Ed started his career selling feed then moved on to the livestock business, buying and selling cattle for Weiller and Williams Co. Ltd. The company sent him to Lloydminster to operate their branch office there. Ed and Faye lived there for 4 years. In 1961, they moved to Lethbridge where they have remained. In 1964 Ed started his own successful business, C.E. French Livestock Ltd. In 1968, he was inducted into the Alberta Sports Hall of Fame for his achievements in the sport of boxing. In 1971, they moved outside of Lethbridge to the farm, where he resided until his passing. Ed was a faithful member of the Church of Jesus Christ of Latter-Day Saints, serving in many church callings throughout his life, including the first Branch President in Lloydminster, Boy Scout Master and High Counselor. Many people benefitted from his acts of service. He was an extremely hard worker, devoted to the gospel of Jesus Christ and by example taught his family these principles. Ed was diligent and determined in everything he did. He enjoyed riding his horse. He loved his family and leaves a large posterity that will always remember his life and legacy. He is survived by his loving wife of 60 years, Faye; their 6 children Cynthia (Brian) Low of Cardston, Carol (Tim) Court of Cardston, Cam (Deb) French of Lethbridge, Marie (Ron) Anderson of Redcliff, Carla (Matt) Williams of Eagle Mountain, Utah and Kristine (Ron) Strate of Magrath; 31 grandchildren; 48 great grandchildren. He is also survived by two sisters, Ellen Bingham of Cardston and Elaine (Clarke) Lybbert of Fort Macleod. He is predeceased by his parents; his siblings Rex, Melba, Cliff, Bessie, Keith, Russ, Wallace, infant brother Donald and infant grandson Jared French. Friends may meet the family at Christensen Salmon Generations Funeral Home 703-13 St. N. Lethbridge on Thursday July 27 from 7pm to 8pm and at the church prior to the service from 10am to 10:45am. The funeral service will be held at the Church of Jesus Christ of Latter-Day Saints, Fairmont Chapel, 205 Fairmont Blvd. S. Lethbridge, Alberta on Friday July 28, 2017 at 11am. Interment to follow in the Mountain View Cemetery, 1210 Scenic Dr. S. Lethbridge.