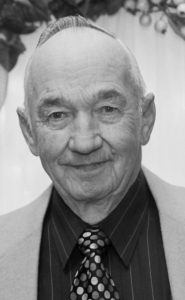 It is with sadness we announce MARK NORTON PASSEY passed away peacefully at the age of 84 in Prince George, BC on July 27, 2017 after losing his struggle with cancer. Mark was born on February 27, 1933 in Magrath, Alberta, the youngest of 7 children. Mark worked on the family dairy before joining the US Air force where he was stationed at several locations across the United States and England. Upon returning home to Magrath he married Maria Passey and settled down to raise their ‘yours, mine and ours family’. Mark was an Electrician by trade and oversaw the wiring of many buildings in Alberta. He was known as a very hard worker and took pride in a job well done. In later years, he designed and built the Covered Wagon RV Park, which he then ran for 21 years alongside Maria. Mark enjoyed interacting with their guests, taking the children for wagon rides, and showing off his antique collection. Mark enjoyed showing his horses in the early years alongside his kids, and passing on his horse training techniques. He loved to drive and cut hay with his mules, and enjoyed building wagon wheels at the Remington Carriage Centre. His last project was restoring an 1860’s chuck wagon, which he then drove in several parades. Mark is survived by his brother Ron (Jean) Passey, daughters Addie (Don) Sorkilmo of Long View, AB, Heidi (Frank) Swan of Drayton Valley, AB, Joanne (Bruce) Chatterton of Calgary, AB, sons Kevin (Deanne) Passey of Fort St John, BC, Quint (Rose) Passey of New Serepta, AB, Derrick (Becky) Passey of Prince George, BC. 18 grandchildren, great grandchildren and special friend and neighbor, Frances Woollard. Mark was predeceased by his loving wife Maria Passey, Jayne (Luke) Ouellette, his parents Bill and Myrtle Passey, his brothers Garth and Glenn, and sisters LaDean, Ruth, and Arlene. Friends may meet the family at the CHRISTENSEN SALMON GENERATIONS FUNERAL HOME, 703-13 St. N., Lethbridge, AB on Wednesday, August 2, 2017 from 11:00 AM to 12:00 PM. A Graveside Service will follow at the Magrath Cemetery, Magrath, AB at 1:00 PM.