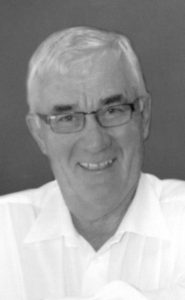 MR. MELVIN “MEL” ALLEN STOVEL, loving husband to Mary-Claire Stovel, passed away peacefully in the Chinook Regional Hospital after a brave battle against cancer, on Thursday, July 27, 2017 at the age of 69 years.

Mel was born in Medicine Hat General Hospital on November 4, 1947. He was the first child of Orvel and Nellie Stovel and was raised with his siblings on the family farm north of Foremost. Mel graduated from Foremost High School and then studied agricultural mechanics at the Southern Alberta Institute of Technology. He returned to the family farm and launched Mel Stovel Enterprises Ltd. in 1978. Specializing in customizing John Deere combines, Mel grew his company and served clients across the Prairies and parts of the United States for almost 40 years. He established a reputation for his innovation in agricultural mechanics, earning the nickname “The Combine Doctor.”

In 1978, Mel married Mary-Claire and together they shared a happy home in Lethbridge for almost 40 years. An avid curler in his early years, Mel also coached curling and taught welding at Lethbridge Community College. He discovered his passion for golfing later in life and enjoyed his membership at the Lethbridge Country Club. He and Mary-Claire traveled and together they saw much of North America and enjoyed overseas trips, including China. Mel loved spending the winters in Casa Grande, Arizona where he could indulge his passions for golf and woodworking. Nothing pleased him more than spending quality time with his friends and his clients, most of whom became lifelong friends.

A Service of Remembrance will be held at ST. ANDREW’S PRESBYTERIAN CHURCH, 1818 – 5 Avenue South, Lethbridge, AB, on Saturday, August 12, 2017 at 11:00 A.M. with Reverend Larry Hankinson officiating. A Private Family Burial will precede the service.

In memory of Mel, memorial donations may be made to a charity of one’s choice.