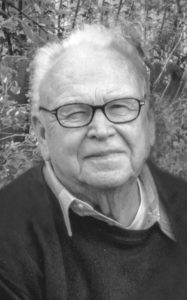 It is with great sadness that the family of Simon Kalau announce his passing on Tuesday, August 8, 2017 at the age of 85 years.

Simon was born in Mureiken, Lithuania on April 19, 1932. He immigrated with his family to Canada in 1951 and settled in Milk River and then in Stirling, Alberta. He married the love of his life, Elsie Kalau, on February 5, 1955. Simon moved his family from Stirling to Lethbridge in 1967. Simon was a carpenter by trade and worked with a number of contractors on many projects in Lethbridge and area. He worked for a number of years with Kenwood Engineering and Construction. Simon retired at age 65 and kept himself busy building and fixing things for friends and family and looking after his grandchildren. Simon loved to fish, camp, and play cards. Simon will be well remembered for spending hours talking to friends and strangers alike. He loved his family pets, and always enjoyed family celebrations and spending time with friends. Many people turned to Simon for a helping hand and he was always willing to provide what he could to help others out.

The family would like to extend a special thank you to Dr. Greidanus and Dr. Boora as well as to the staff at St. Therese who provided such compassionate care to Simon in the last few months of his life.

One Condolence for “KALAU, SIMON”