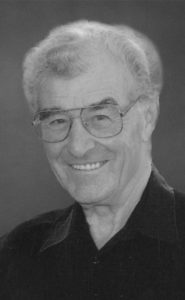 JOHN MEHALKO, beloved husband of Helen Mehalko passed away on Friday, August 11 at the age of 94.

He was born in Retlaw to George and Julia Mehalko on July 12, 1923. The fourth of five children, John was raised on the homestead family farm in the Sundial area and started working on the farm as a small boy while attending school. John continued farming until moving into Lethbridge, where he continued to trade cattle.

John married Helen Kundrik and they celebrated their 65th Anniversary this past June. John was the loving father of Joyce (Richard) Haney and Donna (John Colapinto) of New York. He has four grandchildren, Shaun (Tricia) Haney of Picture Butte, Kevin, Kerri Lynn (Bradley)Vanderberg, and Johnny Colapinto, and five great-grandchildren, Kalem, Rylynn, and Karsen Haney, and Damen and Kadence Vanderberg. He is also survived by sister-in-law Maxine Mehalko and many nieces and nephews.

John was hardworking and generous to his family and friends. Competitive in all aspects of his life, he played for the Sundial Baseball Team, curled, played horseshoes, and was an avid sportsman. He had a love for camping and traveling and was known for his meticulous attention to his motor homes and boats.

The family would like to thank the caring staff of St. Michael’s Healthcare Centre where John resided for the past eight years.

Family and friends are invited to a Service of Remembrance at CORNERSTONE FUNERAL HOME, 2800 Mayor Magrath Drive South, Lethbridge, Alberta on Tuesday, August 22, 2017 at 11:00 AM.

In lieu of flowers, donations may be made to the St. Michael’s Health Centre – Recreational Music Program, 1400 9th Avenue South, Lethbridge, AB T1J 4V5 or to the Heart and Stroke Foundation.