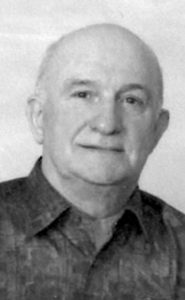 Mr. Guido Emilio Nekich of Lethbridge, passed away on Wednesday, August 16, 2017 at the Chinook Regional Hospital at the age of 86 years.

He was the loving father of daughters Sonia (Phil) Nicas of Lethbridge, Laura (Charles) Crosse of Denver, Colorado and son Gary (Barb) and beloved grandson Alexander Nekich of Lethbridge.

Guido is also survived by 2 sisters-in-law as well as many nieces, nephews and their families.

He was predeceased by his father Santo; mother Giovanna; brothers Bruno, Giuseppe, Aldo and Reno; and grandson Michael.

Guido was born in Italy in 1931 and arrived in Canada in 1951. He worked at Purity Dairy and Palm Dairies for over 30 years.

Guido enjoyed golfing for several years and dancing at the Italian Canadian Club, which he continued until April 2017.

Cremation entrusted to Martin Brothers Funeral Chapels. A Private Family Graveside Service will be held in the Mountain View Cemetery.