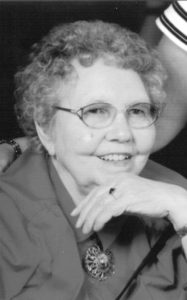 MABELLE ELLEN FLEMING (HUMMEL) died peacefully in the Milk River Long Term Care facility on August 15, 2017, at the age of 94.

Mabelle is survived by her daughters, Nancy (Ron) Wollersheim of Lethbridge, Pat Fleming of Edmonton, Joan (Robert) Kuhl of Milk River, Barbara Dinan of Lethbridge and Bev (Ken) George of Burlington, Ontario and daughter-in-law Bev Fleming of Milk River. She is preceded in death by her husband Bob Fleming and two sons, Stan Fleming and Ron Fleming, and son-in-law Ed Dinan.

She was born on December 6th, 1922 in Milk River, Alberta. She graduated from High School in Seattle.