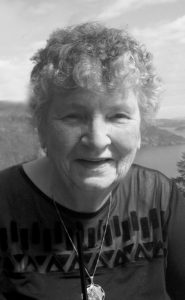 Mrs. Alida Hess of Lethbridge passed away surrounded by loving family on August 18, 2017 at the age of 80, at Chinook Regional Hospital. She was born in Sneek in the Netherlands on September 1, 1936 to a mother who died of cancer 6 months later. She was the youngest of 11. Her father encouraged her to move to Canada, so at 20 she bravely left on her own and made a life for herself here. She met her beloved husband Fred while working in the Dominion Stores Bakery in Calgary. They married in 1959. Together they owned several businesses; the best known was ‘Fred’s Bakery’ in Lethbridge. She and Fred lived on a small farm in Sunnyside where she hosted Pancake Breakfast trail rides, Easter Egg Hunts, weddings, and many foreign visitors. She loved to cook and entertain. Since Fred’s passing in 2015, life was difficult for Alida. She was also predeceased by her 10 siblings. She leaves behind her daughters Jacqueline (Gordon), Ingrid, and Monica (Anthony); grandchildren Heather, Jennifer, and Dustin Kuhl, Remko, Apollo, and Til Hess, Ryan and Kali Sayers. At her request, there will be no service. Those who wish may make memorial donations to: The Lung Association, Alberta & NWT, P.O. Box 4500, Station South, Edmonton, Alberta, T6E 6K2.