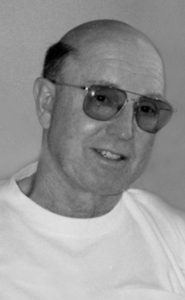 Mr. Grant Kristjanson of Lethbridge, beloved husband of Mrs. Elaine Kristjanson, passed away at St. Michael’s Palliative Care on Sunday, August 20, 2017 at the age of 74 years. Grant leaves to cherish his memory his wife, Elaine, and daughters Donna Ackerman (Mike) of Lethbridge and Karen Mason of Calgary. He is also survived by his grandchildren Kevin (Amber) Jordan, Matthew Jordan, Devon Mason and Alexandra Mason. Grant was also so proud to be great-grandpa to Olivia and Hudson Jordan. He will also be missed by his sister Wendy (Lynn) Hayes. Grant was born on March 2, 1943 in Quill Lake, SK to Stan and Mary Kristjanson. He moved with his family to Lethbridge in 1955 where he met friends he remained close to all of his life. He was an original member of the LeBarons Car Club. He was a dedicated employee of 56 years at Enerson Motors/Davis GMC where he continued to work as shuttle driver until his health no longer allowed him to, and he was very proud of his achievements there. Grant and Elaine enjoyed several years travelling to Mesa, AZ in the wintertime, and anywhere they went there wasn’t a classic car show-and-shine or an aviation museum that was missed as those things were his passions. We know Grant was loved by many, but it was his wish to have no funeral service. The family thanks everyone who was so good to us during his illness and for the many, many visitors that came to see dad in hospital. He will be dearly missed and never forgotten. The family wishes to decline the offering of flowers and asks that any donations in Grant’s name be made to St. Michael’s Palliative Care, 1400 9 Ave S, Lethbridge, AB, T1J 4V5.

One Condolence for “KRISTJANSON, Grant”