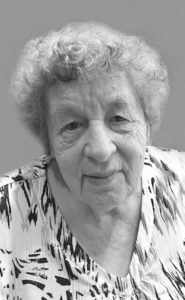 Early Sunday morning, August 20, 2017, our dear mom, Else Goldmann, went to her final rest. She passed peacefully at Chinook Regional Hospital under the watchful care of the nurses of Unit 4C. Else was born May 30th, 1932 in Zurawitz, Volynien, Poland to Wilhelm and Mathilde Drefs. She was one of four surviving children. She immigrated with her parents and youngest sister to Canada in the spring of 1952 and settled in Stirling. She married Peter Goldmann Jr. on September 21, 1963 after a short courtship. Else and Peter farmed in the Stirling area until retiring to Lethbridge in 1998. Else loved to cook and bake, especially to entertain her family, friends and neighbours. She will be lovingly remembered for spending hours talking with friends and strangers alike, sitting on her favorite couch in the garage. After her sudden loss of vision, Else moved to Blue Sky Lodge in July, 2016, where she resided until just before her passing. Else was predeceased by her parents Wilhelm and Mathilde Drefs and her sister Hildegard Mikl. She is survived by her daughters, Darlene Turnbull and Joann Krysak; grandchildren, Jesse Turnbull, Kendra Turnbull, Matthew Krysak, James Krysak, and Megan Krysak; her sisters, Ida Vogel (of Germany), and Johanna Drefs (of Calgary). Many thanks to staff of Chinook Regional hospital 4C and Piyami Place, Picture Butte. A Funeral Service will be held at 2:00pm on Friday, August 25, 2017 at MARTIN BROTHERS FUNERAL CHAPELS, 610 – 4th Street South, Lethbridge, Alberta. Interment to follow in the Mountain View Cemetery, 1210 Scenic Drive South, Lethbridge, Alberta.

One Condolence for “GOLDMANN, Else”