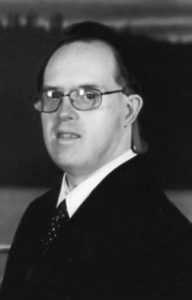 He is survived by his father, Grant; his brother, Arlan; his sisters Ramona (Bruce) Easthope, Jeanelle (Jim) Livingston, and Melanie (Rod) Hillam.

He is missed and loved by all who knew him. Many thanks to the caregivers at Clifton Manor (Unit 600) and Seton Senior Community for all that they did for Boyce and his family over the past several years.

Instead of flowers the family is asking that donations be made to “The Brenda Strafford Foundation” so that others, with the same needs as Boyce, can enjoy the respect and care that is available.