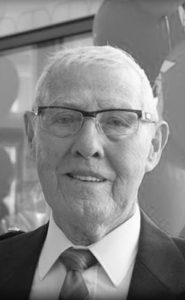 JOHN PETER BOYES, beloved husband of Nancy Boyes passed away on Sunday, August 27th, two days before his 80th birthday. John was born in Lanarkshire, Scotland, the only child of Bridget and John Boyes. He married Nancy in July 1958 and together they had seven children. John was the loving father of Gerard, Thomas, Frances, Dominic, Peter, Allison (Jeff Vucurevich) and Lee. He has five grandchildren, Scot, Calum, Clark, Brae and Tavish. John and Nancy immigrated to Canada in 1975 spending 25 years in Regina Saskatchewan where he worked as a Heavy Duty Mechanic. In 1996 John retired from Saskatchewan Power and he and Nancy moved to Lethbridge. John continued to work part time at Charlton Hill as he always liked to keep busy. John was a man of strong faith, always involved in his church and helping others. His humour and good nature will be remembered and cherished by family and friends who loved him dearly. He loved spending time with his grandsons, golfing, Scottish Country Dancing, traveling and was known for his meticulous attention to everything he owned, especially his car and RV. A Prayer Service will be held at ASSUMPTION CATHOLIC CHURCH, 2405 -12 Avenue South, Lethbridge on Monday, September 4, 2017 at 7:00 PM. A Memorial Mass will be held at ASSUMPTION CATHOLIC CHURCH, 2405-12 Avenue South, Lethbridge on Tuesday, September 5, 2017 at 10:00 AM with Reverend Kevin Tumback Celebrant. Inurnment to follow in Mountain View Cemetery. In lieu of flowers, donations may be made to the St. Vincent De Paul Society, 2405-12 Avenue South, Lethbridge, T1K 0P4.