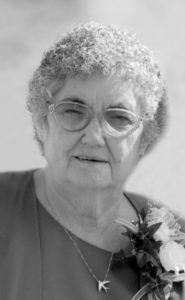 Mrs. Elizabeth (Betty) Jeanne Rose (Cunningham) Waldern, a long and faithful soldier of The Salvation Army, was “Promoted to Glory” to be with God on Thursday, August 24, 2017. Born on July 26, 1931 in the Galt Hospital, the sixth and youngest child of Leo and Harriet Cunningham. The family originally lived on an acreage in Coaldale and at the age of five months moved to an acreage on the outskirts of Lethbridge, in what is now the Lakeview area. At two years of age, they moved “to the city” and Lethbridge has been home ever since. Mom gave of herself in service to others, whether it be to family or community. Seniors and senior concerns were a passion for her. She was instrumental in a number of senior organizations: the Lethbridge Pensioners and Senior Citizens, later the Chinook Pensioners and Senior Citizens, the Alberta Pensioners and Senior Citizens and the National Pensioners and Senior Citizens Federation. She served in leadership roles of these organizations, often as Secretary or President. For a great number of years, she was instrumental in church ministry to senior’s lodges and nursing homes. In our community, she served on the Landlord and Tennant Advisory Board and was the founding President of Lethbridge Lifeline Association. Having a special needs daughter, she became involved as a volunteer and coach with Special Olympics. In 1980, she was presented a certificate by the City of Lethbridge in appreciation for her generous and unselfish way in which she had rendered valuable service for the betterment of our community. She will be remembered as a loving Mother who was always there for her family. As the grandchildren and great grandchildren arrived, she became known as Nana and was instrumental in their young lives. Elizabeth was predeceased by her mother Harriet and father Leo; brothers, “Slim”, Leslie and John Cunningham; sisters, Verna Moe and Josephine Cunningham; and daughter Donna Waldern. As well, by a very dear and special friend Norma St. Dennis. She is survived by her son Gerald and daughter-in-law Pamela Waldern; grandchildren Jerry (Pam) Waldern and Bonnie Wilson; great-grandchildren, Wesley, Justin and Marcus Waldern; and Grace Wilson, as well as many nieces, nephews and cousins. Family and Friends are invited to a Visitation at 7:00pm on Friday, September 1, 2017 at the MARTIN BROTHERS RIVERVIEW CHAPEL, 610 – 4 Street S., Lethbridge, Alberta. A Funeral Service will be held at 10:00am on Saturday, September 2, 2017 at THE SALVATION ARMY COMMUNITY CHURCH, 1302 – 4 Avenue S., Lethbridge, Alberta, with Captains Ben and Isobel Lippers officiating. Interment will follow in Mountain View Cemetery. In lieu of flowers, donations may be made to The Salvation Army in Lethbridge.

One Condolence for “WALDERN, Elizabeth”