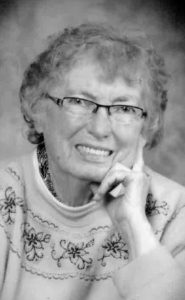 Annie (Anne) Clarke Paskuski, nee Wilson, of Lethbridge, died peacefully in her sleep on September 4, 2017 at the age of 88. Mom was born on November 13, 1928 and grew up in Coleman, Alberta. As a teenager, she moved to Lethbridge with her two sisters. There she met and married the love of her life, Peter Paskuski, and together they raised four children. Throughout her life, Anne was the center of her family always providing support, gentle guidance and encouragement to her children, grandchildren and great-grandchildren. She was a dedicated wife, mother and grandmother who always put her family first. Anne was a strong, but soft-spoken woman, very hardworking and strived to set a good example for her children. She was a wonderful cook and baker and enjoyed many Sundays preparing family dinners. Anne was also the quintessential hockey/baseball mom before it was fashionable and she could usually be found at the local rinks in the winter and ball diamonds in the summer quietly cheering for her star players. In her spare time, she enjoyed and excelled at a variety of handicrafts but was an especially gifted knitter and made beautiful Disney sweaters and blankets for her grandchildren. Anne was predeceased by her beloved husband, Peter, in 1994 after 47 years of marriage; her parents, Arthur and Margaret Wilson; her son-in-law, one sister and one nephew. She is survived by her children, Cheryl Regier Thomas (Griff), Dan (Sheila), Gary (Marianne) and Debby; nine grandchildren, 14 great-grandchildren, one sister, Janet and numerous nieces and nephews. The Paskuski family would like to thank the staff at St. Therese Villa for the care they provided to Anne for the past three years. A Celebration of Anne’s Life will be held at a later date. In lieu of flowers the family requests that donations be made to Family Centre, 225 – 200, 4th Avenue South, Lethbridge, AB., T1J 4C9, a charity that was near to Anne’s heart.