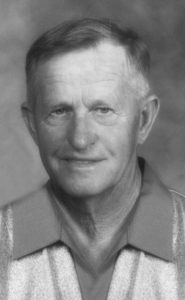 ADRIANUS “HARRY” WILHELMUS TYMENSEN, of Lethbridge, beloved husband of the late Celia Tymensen, passed away at the St. Michael’s Health Centre – Palliative Care Unit on Monday, September 4th, 2017 at the age of 82 years.

Harry is survived by his children Cindy Tymensen, Adrian Tymensen and John (Sarah) Tymensen. He also leaves to cherish his memory his grandchildren Adrianna and Willem. He is also survived by numerous brothers and sisters in Holland.

Besides his beloved wife Celia, Harry was predeceased by several brothers and sisters.

Harry was born on January 18th, 1935 in Holland, where he resided and worked for 25 years. He was with the Dutch Army before moving to Canada. In 1960, he arrived in Halifax and quickly moved to Winnipeg where he stayed and worked for two years. In 1972, after moving around a little more and working at numerous jobs, he married his wife, Celia. Shortly after, they settled in Lethbridge and he started his own company, Prestige Homes Ltd. Harry continued to run his company until 1989, after which he began working at Perma Green as a tree advisor, salesman and handyman. Even at 65 years old, he continued to keep himself busier than ever, building small construction jobs for friends.

Harry had a big passion for sports, especially soccer, golf, badminton, tennis and fishing, having earned several trophies in most of them. His main hobby was caring for his garden, which he took a lot of pride in. He was also an avid card player; not only would he play all day and all night, he would make sure he won most of the games too. He had been the champion for many years in his church’s Bridge Club. Aside from his hobbies, he was engaged in many different associations, such as the Knights of Columbus, Catholic Charities Clothes Bank and Canadian Red Cross. Harry was a big jokester, but remained serious and focused on any projects or jobs he took on. He was a very healthy man that remained active throughout his life.

A Funeral Mass will be celebrated at OUR LADY OF THE ASSUMPTION CATHOLIC CHURCH – 2405 12th Avenue South, Lethbridge, AB on Saturday, September 9th, 2017 at 10:00 A.M. with Father Kevin Tumback, Celebrant.

One Condolence for “TYMENSEN, Adrianus”