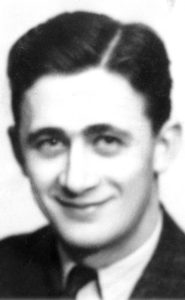 William (Bill) Bikman, loving husband of Erma Rasmussen Bikman, died peacefully in his sleep on September 7, 2017. He was 96 years old. Born in Lethbridge March 2, 1921, he spent his entire life here. After retiring in 1977, he and Erma enjoyed wintering in Palm Springs where he learned to golf and was “Mr. Fixit” to all his elderly neighbors there, helping them with any of their construction or auto repair needs Bill worked with his brother, Abe, at Speedy Delivery, the company Abe started in 1935. This business later became Speedy Storage & Cartage Ltd and then, moving into the oilfields, Speedy Heavy Hauling Ltd. In 1983 Bill received the Founder Award from the American Truck Historical Society for his lifetime achievements & service in the trucking industry. During WW II he was an airframe mechanic, stationed in Medicine Hat, Alberta. Bill was known and admired for his integrity, ingenuity and work ethic. “Make your word your bond” he advised his 3 children, a slogan he practiced all his life. He was always a strong, generous supporter of Jewish causes and the establishment of the State of Israel, even after joining the Church of Jesus Christ of Latter-day Saints. He also gave freely of his time and resources in service to others. A long-time Rotarian, he was the first to volunteer on service projects. In Church he likewise would quickly raise his hand when a group was being organized to help someone move, repair a storm damaged house, or render other charitable service. Bill was predeceased by his beloved daughter Debra Edna Bird, daughter-in-law, Suzy, as well as his parents and all of his siblings. Left to mourn his passing and celebrate a life well lived are his wife, Erma, their sons, Gary and Shane; Gary’s wife, Sheila; his son-in-law, Craig Bird; 31 grandchildren and 72 great grandchildren as well as numerous nieces and nephews. The family wishes to thank the wonderful, supportive and caring staff at St. Therese Villa. You made Bill feel welcomed, respected and valued. We never worried because we knew how much you cared. A Celebration of his Life will be held at 11:00am on Saturday, September 16, 2017 at THE CHURCH OF JESUS CHRIST LATTER-DAY SAINTS – Stirling, AB. Friends may meet with family prior to the service from 10:00 – 10:45am. Bishop Jim Seely officiating. Interment to follow in the Bikman family section at Stirling Cemetery.