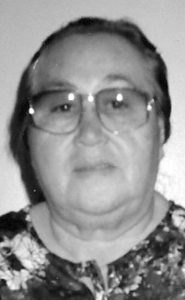 IRENE ISABELLA McHUGH, beloved wife of the late Pastor Leo McHugh went home to be with Jesus on Monday September 11, 2017 at the Cardston Hospital. Irene was born on June 19, 1932 to Albert and Mary Chief Calf at the Galt Hospital in Lethbridge.

Mom had many happy memories of life at their home on the north end of the Blood Reserve. Mom was a hard worker and great cook. She worked at the Charles Camsel Hospital in the early 50’s and met Hank Williams Sr., Kitty Wells and Hank Snow when they performed for patients. She shook hands with them and got autographed pictures. She later met and married Leo McHugh and resided at St. Mary’s Dam area. They gave their hearts to the Lord and worked hard in the ministry. She stood by Leo as pastor’s wife and turned their old house into a church. She loved to cook for family and friends, always having a big Sunday dinner at her house. They always looked forward to camp meetings in the summer.

When dad passed away, mom stayed at her home until she moved into the Kainai Continuing Care Center and that was home to her. She loved living here and loved her caregivers and everyone else there. They treated mom with so much love and respect. She was joined there by her cousins May Weasel Fat, Christian friend Theresa Eagle Plume, her childhood friend Lena Russell and Hilda (Day Chief) Smith, who she has known all her life and considered a niece. Mom was content with life there and never wanted to leave. She had nieces who worked at LTC and one in particular she was close to was Carolla Chief Calf.

Irene is survived by her children Francis (Linda), Peter (Stella), Lloyd (Karen) Carmen (Gilbert) and Catherine, adopted daughter Janet (Curtis) Little Child of Hobbema. There were many others she adopted into her family as well. She is also survived by her many grandchildren, great-grandchildren and 2 great-great-grandchildren, Layla and Luna. Also numerous nieces, nephews and their families. Cousins Mary Twigg and Theresa Plume, best friends, Elizabeth Holy White Man and Marina No Runner.