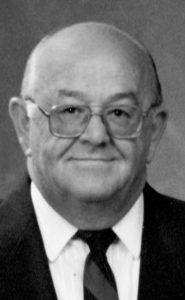 ORSON DOUGLAS ALSTON (Feb. 11, 1928 – Sept. 15, 2017) passed away peacefully at home. Doug will be lovingly remembered by his wife of 60 years, Janet (Turner); his children, Jody, Jim (Sandy; their children Kristen, Kayla, Jaclyn), Drew (Wendi; Andrew, Lauren, Nathan, Madison), Jackie (Kent Warnica; Lauren, Katie), Donna (Trent Taggart; Nathan, Jessica, Becky, Rachel, Kate) and, Jonathan (Jenny; Valerie, Garett, Ethan) and great-grandson Jared James. He is survived by his sister Hope Alston, brother Tyler (Gloria), sister-in-law Doreen Alston, his brother-in-law Lawrence (Norma) Turner and many nephews and nieces. He was predeceased by his parents Joseph and Norma Alston, his sister Beulah Holst, brother Cal, nephews Burns and Kevin, and grandsons Jared, Kyle, and Isaac. Doug was born in Magrath and by all accounts, which there were many, had a glorious upbringing full of adventure and friendships. As a young man, he followed his mother’s urging to get a university education. He graduated from Utah State University with degrees in Political Science (BSc and MSc) and the University of Alberta in Education (BEd). After graduating, he began his career as a teacher in Southern Alberta. He taught social studies and eventually became the principal in Glenwood. In 1957, he married his high-school sweetheart, Janet. He remained grateful to the kind and good people of Glenwood who influenced his life in such a positive way. In 1962, the young family moved to Cardston where he taught and became principal of Cardston High School. In 1968, the family moved to Lethbridge when he was hired at the Lethbridge Junior College (Lethbridge College) as the Director of Liberal Arts (Dean of Natural and Social Sciences). He worked at the college for over twenty years during an exciting time in its history and was supportive mentor to many fine instructors and college employees. Doug was a faithful member of The Church of Jesus Christ of Latter-day Saints. He served as Bishop of the Lethbridge 4th ward and as a counsellor in the Lethbridge Stake Presidency. After retiring from the college, he was called to serve as President of the Nigeria Lagos Mission. Doug and Janet cherished their oft-challenging but rewarding time in Africa. When they returned, Doug and Janet loved serving as temple workers in Cardston. He also enjoyed teaching Gospel Doctrine classes and faithfully served in the church until his passing. Dad was a kind, gentle, compassionate man who saw and encouraged the best in people. His greatest happiness was his family and often told them he felt “blessed and highly favoured”. Dad wrote many letters over the years to his children always signing off with “Keep the Faith” and “Love One Another”. His physical presence will be greatly missed by all who loved him; however, his spiritual presence will remain within each of our hearts. His life of devotion and dedication will forever be an example to us. God be with us till we meet again. Family will greet friends and relatives at the Generations Funeral Home (703 -13-St-N.), on Thursday, September 21st from 7:00 to 8:00 p.m. or at the church from 10:00 to 10:45 a.m. prior to the service. The funeral service will be held at the Lethbridge Alberta Stake Center (Scenic Drive) on Friday, September 22nd, 2017 at 11:00 a.m.