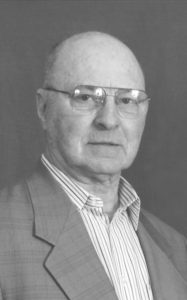 Mr. Arie Stotyn passed away on September 20, 2017 at the Chinook Regional Hospital at the age of 96 years.

Arie, the seventh of twelve children of William and Stina, was born on April 19, 1921 at Monarch, AB. Arie grew up on the family farm west of Monarch and was educated at the local school. During his lifetime, he worked as a farmhand, trained as a firefighter and finally as a Government Meat Inspector in the Lethbridge area until he retired. Arie was a long-time resident of Lethbridge and had moved to Black Rock Terrace four years ago where in resided until his passing.

Arie is survived by his sister, Truda (Walter) Luce; brother Ed (Sheila), sisters-in-laws Eileen, Lena and Anne. He is also survived by his many nieces, nephews and extended family members.

In lieu of flowers, donations can be made to the charity of your choice.

Family and Friends are invited to pay their respects between 6:00pm and 8:00pm on Sunday, September 24, 2017 at the MARTIN BROTHERS RIVERVIEW CHAPEL, 610 4 Street S., Lethbridge, Alberta.