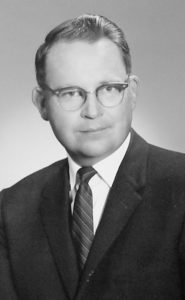 Byron Cazier Palmer, loving husband of Irene Harris Palmer, died Sunday Sept. 17, 2017 in his sleep of age-related causes. He was 91.

Byron was born May 16, 1926, in Lethbridge to Asael Exile and Maydell Cazier Palmer on the Dominion Experimental Farm, now known as the Lethbridge Research and Development Center.

He graduated from the Lethbridge Collegiate Institute in 1944 and attended the University of Alberta in Edmonton before transferring to Utah State University where he graduated in 1948 with a degree in Irrigation Engineering. A faithful member of the Church of Jesus Christ of Latter-day Saints, he then served a mission for the church in Uruguay from 1949 to 1951.

He married his eternal sweetheart Irene Harris in the Cardston, Alberta Temple in 1952.

Byron was a member of A.P.E.G.G.A. as an engineer all over the world. He began his career working for the Prairie Farm Rehabilitation Act. In 1955 he provided security to his country by working on the Mid Canada Early Warning Line. He was later employed by the Ontario Water Resources Commission in Toronto from 1957 to 1967, and received a master’s degree in Engineering from the University of Toronto in 1959. He took his family to Merida, Venezuela in 1967 where he was a member of a group of engineers providing training in land and water resource development to an international clientele. In 1969, he lead a training program in Colombia for 250 government officials in charge of irrigation. He moved his family to Logan, Utah, in 1970 when he took a position with Utah State University as a field director for an international water research program. In 1975 he received a PhD in Engineering from North Carolina State University in Raleigh NC. In 1976, he worked for a year in Nairobi Kenya on a project to assess lands, water and infrastructure resources. In 1978, he returned to Lethbridge to care for his aging parents and served as a consultant for Underwood and McLellan before retiring in 1987.

Over the course of his life, he held many positions in the Mormon Church, from being a Scout leader to a Sunday School teacher. He was a bishop of the Lethbridge Seventh Ward from 1979 until 1984. He and his wife served a mission for the church in Hawaii in 1991 and served as a temple worker in the Cardston Alberta Temple.

He enjoyed photography, camping, canoeing and computers. He was a terrific chess player who also loved laughter. He could play a mean boogie-woogie tune on the piano and he had a plethora of wonderful humorous stories from his years of travel. He was notorious among his family for clever puns and word play. He stood ready to lend a helping hand wherever it was needed. He was a kind and gentle son, husband, father, grandfather and uncle.

He will be greatly missed and lovingly remembered by his wife and sisters, Camille Hawkins (Bill) of La Grande OR, and Eileen Smith of Newhall CA; four children, Stephen of Windsor, California, Susan of Eugene OR, Linda Nielsen (Thomas) of Barnwell AB and Elaine Cox (Martin) of Sammammish WA; seven grandchildren and numerous nieces and nephews.

Thank you to the Fairmont Extendicare Staff and to Dr. David Stewart for the exceptional care given to Byron for the past few years.