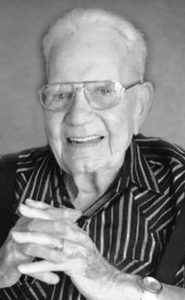 MICHAEL JOHN “JACK” KINAHAN passed away peacefully and surrounded by his loving family at the St. Michael’s Health Centre – Palliative Care Unit in Lethbridge on Sunday, September 24, 2017 at the age of 91 years.

He was predeceased by his daughter Deborah “Debi”, his parents, his two brothers, his two sisters and their husbands, and Leona’s three brothers and two of their wives, her sister and husband and her remaining sister’s husband.

Jack was born at his home on the family farm in Blucher, Saskatchewan on June 27, 1926. He married Leona Heisler on June 27, 1953 and shortly thereafter they moved to southern Alberta where they raised their eight children. Their last 49 years were spent in Lethbridge.
Dad was a veteran, having served his country proudly in WWII. He was an honourary life member of the Knights of Columbus and was a faith filled man who served his church in many capacities throughout his life. His deep love of God, family and friends was the greatest gift he gave to us all. In a letter written to his family a couple of years ago, Dad said, “One kind word said to the living is worth more than a million tears shed over a grave.”

A Prayer Service will be held at OUR LADY OF THE ASSUMPTION CATHOLIC CHURCH – 2405 12 Avenue South, Lethbridge, Alberta on Friday, September 29, 2017 at 7:00 P.M. with Father Kevin Tumback officiating.

A Funeral Mass will be celebrated at OUR LADY OF THE ASSUMPTION CATHOLIC CHURCH on Saturday, September 30, 2017 at 11:00 A.M. with Father Kevin Tumback, Celebrant.

In honour of Dad’s life, donations may be made to a charity of your choice, as Dad never refused an appeal for help from any needy charity.