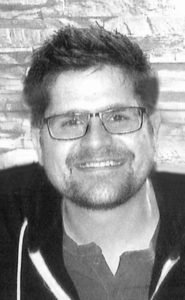 Mr. Steven Caswell of Lethbridge, passed away suddenly on Sunday, September 24, 2017. He was the beloved son of Bill & Shelley Caswell and Shirley McKay. Steven was born on March 25, 1987 in Lethbridge and resided here until the time of his passing. His school years were spent at Mike Mountain Horse, Hamilton Junior High and LCI. He then went on to achieve a post-secondary education at the U of L where he completed and received a bachelor’s degree of General Management. Steve had many interests such as traveling, cooking, hiking and discussing current world events, just to name a few. His family, his friends and his loyal canine “Hugo” were his top priorities. Recently Steven bought his first home and was looking forward to showing it off to everyone. He rarely missed an opportunity to get together for a family meal, a game night or just to hang out and watch a movie. His enthusiasm for new adventures and music, his kind soul, infectious smile and his wonderful sense of humor will never be forgotten. Steve is survived by his brother Robert Caswell and brother Jaydon McKay; sister Shelby McKay and their father Darin; uncles Mike (Tammy) Caswell, Guy (Tunde) Nitz; grandmother Myrna Nitz, his two very special cousins Sean and Matthew Caswell; best friend Ian Hutchings, as well as many cherished members of his extended family. Steven was predeceased by his grandparents Bill & Irene Caswell, Richard & Diana Abel, Betty & John Folk, Gary Nitz and his uncle Bob Caswell. A Celebration of Steven’s life will be held on Saturday, October 14, 2017. (location and time to be announced at a later date) In lieu of flowers the family requests that donations be made to the Heart & Stroke Foundation, 1011-2 Ave South, Lethbridge, Alberta T1J 0C8 or to the charity of one’s choice. Cremation has been entrusted to Martin Brothers Funeral Chapels.