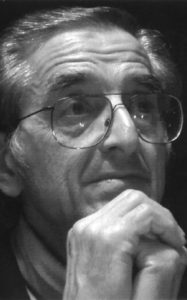 Van was born in Lethbridge Alberta, on January 24, 1926, the second son of Chris and Anastasia, who immigrated from Greece. He was raised in Lethbridge as part of its vibrant Greek community. Through the Canadian Army Officer Training Corps, he attended the University of Alberta, graduating in 1948 with a Doctorate of Dentistry and a Queen’s Commission at the rank of Captain. On a Canadian Eastman Fellowship, he completed postgraduate training in Orthodontics at the University of Rochester from 1948-50. He returned to Lethbridge initially to practice general dentistry with Dr. JS Stewart, later establishing his own Orthodontics practice of 37 years.

His marriage to Helen Afaganis in 1952 was one of great love and mutual respect. Helen’s influence on Van’s life cannot be overstated: her compassion and elegant beauty complimented every aspect of Van’s life, even after her death in 2001. They raised a family of four children in an atmosphere of creativity, curiosity and adventure. Their home was always a warm, welcoming meeting place for friends, family and visitors from afar.

Van saw beauty around him and expressed it through many forms of art. He would be seen early mornings, camera in hand, marveling at the day’s new sunrise over Henderson Lake, or wandering through Nika Yuko Japanese gardens capturing its exquisite beauty. He believed that active involvement in any creative process provides one with the confidence to imagine and realize a more humane world.

Van actively engaged in civic affairs with imagination and wisdom. His vision for accessible liberal arts education was realized in 1967 with the establishment of the University of Lethbridge. He had a mind full of ideas, many of which came to fruition through the sixty years he spent engaged with community affairs. His passion for the arts shaped the character of Lethbridge in many ways including the establishment of the Allied Arts Council, the Southern Alberta Art Gallery, the Yates Centre, and the University art collection. His enthusiasm was palpable, his energy unremitting, and his contributions leave this community considerably enhanced

Van was recently honoured by the Blackfoot Nation, who named him “iihhiowdoomoo” (Lead Buffalo). He deeply respected the values of the Blackfoot Nation and took great pride in this honour. His enthusiastic passion for life continues to inspire and he will be greatly missed.

A Private Family Graveside Service will be held at 10:30am on Thursday, October 5, 2017, followed by a Public Celebration of Life from 2:00-4:30pm, at the LETHBRIDGE LODGE HOTEL, 320 Scenic Drive South, Lethbridge, Alberta.

In lieu of flowers, for those who wish, you may make a donation in Van’s name to any charity of your choice.