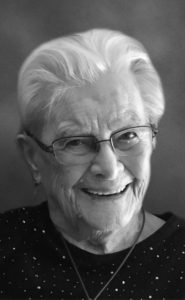 JANET DOREEN FRANCES DICKOUT passed away peacefully at the Piyami Manor in Picture Butte, AB on Wednesday, September 27, 2017 at the age of 90 years.

Janet was born at home in Birtle, MB with the help of her grandmother McKay, the local midwife, on December 20, 1926. In 1929, she and her family decided to move out west to farm near the town of Travers. She attended school in Travers until Grade 10 and completed school in Milo.

She met our dad Clarence while working in a restaurant in Picture Butte and married in February of 1947. Together, they farmed a quarter section of irrigated land just west of Iron Springs for 23 years before moving to the town of Picture Butte in 1970. Mom was always very ambitious, so besides raising three kids and helping where she could on the farm, she took on the role of Census Taker to help supplement income. In 1976, at the age of 49, she decided to upgrade her education at the Henderson Business College and worked for Getkate Construction for a short while before spending many years employed at the town office in Picture Butte retiring as the Town Administrator on January 31, 1991. Since retirement she has volunteered many hours as secretary treasurer for her local church, the Picture Butte Seniors, the Prairie Tractor and Engine Museum Society and the Legion Auxiliary. She also enjoyed many years golfing with the girls as a member of the Picture Butte Golf Club.

She loved her family and community and we will all miss her very much.

Prior to the Celebration of Life, Janet was laid to rest beside her husband at the Huntsville Iron Springs Cemetery.

In lieu of flowers, donations may be made to the Last Chance Cat Ranch (she loved her cats), PO Box 30025 Park Place, Lethbridge, AB T1J 4Z3 or the Trinity United Church, 528 Maple Cres., Picture Butte, AB T0K 1V0 or to a charity of your choice.