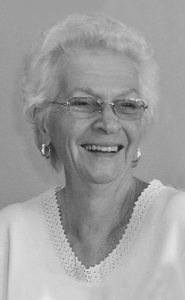 It is with profound sadness that we announce the death of our mom, ISABELLE (MICKIE) NICKLE, nee Harrison, of Victoria, BC on July 15, 2017 at the age of 88 years.

Throughout her life, Mickie applied her skills at numerous companies in Lethbridge but is most remembered for her many years of service at St. Michael’s Hospital. She worked in the dietary department as a night cook, breakfast cook, baker and dietician and made many close friends over her years there. She will be remembered by those she worked with as fun-loving, hard-working and kind.In July 1985, Mickie married Buck Nickle. She retired from St. Michael’s on July 31, 1989, and moved with Buck to Mill Bay, BC that year and then to Chilliwack in 1994. She and Buck spent many happy years on the coast together until his passing.

In 2005, she married Colin Preece and lived with him in Duncan, BC and later in Victoria. Mom and Colin embarked on a series of trips to Alaska, California, Ontario and the Maritimes. Always up for adventure, she tried parasailing for the first time at 78 on her first trip to Mexico and always said she wanted to do it again.

Mom will always be remembered by her entire family as a loving and caring mother, grandmother, great-grandmother and aunt, a music lover, a crackerjack crib player, and a cook/baker extraordinaire. Her cabbage rolls, fried chicken, sugar cookies, ginger snaps and butter horns were just a few of our favorites and staples at every family gathering. She raised all her children with love, patience and the occasional wielding of a wooden spoon (threatened but never used). Her witty and often salty idioms will be forever remembered and repeated with great amusement. Isabelle will be forever missed and forever loved by her family and by the many people she touched through the years with her kindness and generosity.

A Celebration of Life Service for Isabelle will be held at CORNERSTONE FUNERAL HOME, 2800 Mayor Magrath Drive South, Lethbridge, AB on Saturday, October 7, 2017 at 11:00 A.M. with Reverend Erin Phillips officiating.