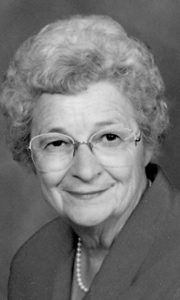 Ann passed away peacefully on October 3, 2017 three days before her 84th birthday. She will be greatly missed by her husband, Lorin; sons, Richard (Heather), David (Karen) and John (Barbara); daughters, Karen Ann Hamilton (Jeff), and Ruth Hale (Robert); 19 grandchildren and 21

Ann was born in Taber, Alberta on October 6, 1933. She was raised in southern Alberta, received a teaching certificate at the University of Alberta while playing all-star basketball on the women’s team. She was married to Lorin in 1956 and this past spring celebrated their 61st anniversary. She loves sports, has been a devoted mother, and served many years in various church positions.

A funeral service will be held at The Church of Jesus Christ of Latter-Day Saints, 2946 South Main Street, in Penticton on Wednesday, October 11, 11:00 am (viewing at 10:00 am) with burial and graveside service at Cardston (Alberta) Cemetery on Friday, October 13, 11:00 am.

A luncheon with the family will be held after each service.

Special thanks for the staff and care-givers at Westview Extended Care for their compassionate care over the past four years.

Condolences can be sent to the family by visiting