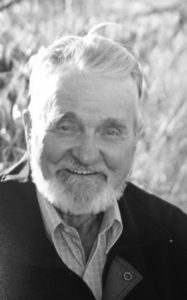 DARRELL ALVIN NELSON, of Glenwood, AB, beloved husband of Rose (nee Albizzati) Nelson passed away in Cardston, AB, on October 3, 2017, at the age of 91. He is survived by his siblings, Dorene (Murray) Bullock of Raymond, AB and his brother Jim (Louise) Nelson of Seattle, WA. He is survived by his children Duane (Linda) Nelson of Glenwood, Suzanne (Wayne) Bennett of Medicine Hat, and Arlene (Johnny) ZoBell of Raymond. He is also survived by 16 grandchildren and 30 great grandchildren. Darrell grew up on a farm in Glenwood where he developed a love for farming. He joined the RCAF on April 25, 1944. When trucking in the Crowsnest Pass, he met Rosie Albizzati and they were married on August 11, 1949 (over 68 years ago). While raising three children, Darrell did long haul trucking from coast to coast. In 1964, while continuing to truck, he started farming. In 1969, he fulfilled his lifelong dream of becoming a pilot and at the age of 86 became a member of the UFO (United Flying Octogenarians). At 49 he started outfitting in the Northwest Territories and three years later he was joined by his son, Duane. For the next 21 years they operated as NWT Outfitters Ltd. During these years he did what he loved: spending time with his wife, having family and friends come visit, hunting, flying, fishing, and making new friends. After retiring from outfitting in the territories, he continued outfitting near his home, farming, trucking (he still had a Class 1 license), ranching and fishing. Darrell took many trips to Alaska and the west coast fishing with friends and family. He was a member of the Church of Jesus Christ of Latter Day Saints and gave many hours of service to his church and fellowmen. He always fulfilled his callings above and beyond the call of duty. He did many unknown acts of kindness and was loved and respected by all that came to know him. He will be sorely missed.

A Funeral service will be held at The Church of Jesus Christ of Latter-day Saints, Glenwood, Alberta on Saturday, October 7, 2017, at 2:00 p.m. with interment to follow at the Glenwood Cemetery.