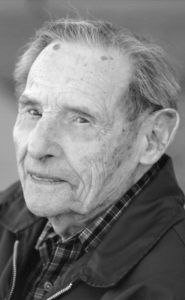 Mr. Raymond Lyckman of Lethbridge, beloved husband of Joyce Lyckman, passed away on Friday, October 13, 2017 at the age of 104 years. Ray was born and raised on the farm east of Carmangay. He rode in a horse drawn buggy to Plainfield school with his siblings. Ray loved the farm and he was willing to work hard. He much preferred helping with the animals than going to school. During his lifetime farming methods changed from horses pulling the equipment to threshing machines and to tractors and combines. Ray was thrilled when his Dad bought a tractor and allowed Ray to drive it. In 1934 a new school teacher, Hilda Stockwell, arrived at Plainfield. Ray courted this young teacher and they were married on October 14, 1939. In 1957 Ray, Hilda, Norma and Warren moved to Lethbridge where they became involved in the community. While living in Lethbridge Ray farmed in the Turin area. He also owned a few quarter horses. Ray and Warren would ride the horses and they were active in the 4H club. Hilda died in 1979. Ray attended seniors dances where he met Joyce Eely Langford. Ray and Joyce were married on November 15, 1980. Ray and Joyce have been together for 36 years. During that time they were active with the Golden Mile Dancers performing at many local functions and also travelling to other cities and providing entertainment. They often walked up and down the coulees and through Indian Battle Park. They were active members of LSCO. Ray and Joyce lived at Martha’s House for several years before moving to St. Therese Villa where Joyce now resides. Besides his loving wife Joyce, Ray is survived by his children Norma (Henry) Bosman and Warren Lyckman; grandchildren Laura Bosman (Jim Ling) and Diane Bosman (Paul Bognar); great-grandchildren Rachel and Amanda Ling. Joyce’s children Geof Langford, Virginia Birss, Carolyn Langford, Kathy and Denton Koenig; 7 step-grandchildren and 12 great step-grandchildren. Ray was predeceased by his parents Arvid Lyckman and Amanda Danielson who homesteaded east of Carmangay, Alberta in 1907; his first wife Hilda Stockwell; sisters Alice, Gladys, Hazel and Pearl, as well as his brother Stanley, who died in February of 2017. Ray was very loved by all and will be greatly missed by his wife, family and friends. Ray’s family wish to extend a special thanks to Dr. Frick and the staff at St. Therese Villa for their compassionate care. A Private Family memorial service will be held at a later date. For those who wish, memorial donations in Ray’s name may be made to the McKillop United Church Renovation Fund, 2329 15 Ave. S., Lethbridge, Alberta, T1K 0X5.

One Condolence for “LYCKMAN, Raymond”