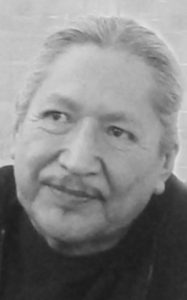 It is with great sadness that we announce the passing of RANDALL MORRIS BLACK PLUME, 52, on Thursday, October 12, 2017 in Lethbridge, AB after a valiant battle with Cancer. His devotion to his family, friends and his firm belief in our Creator supported him in his struggle and ultimately gave him peace. From Randall to family and friends; “A Limb has fallen from the family tree that says Grieve not for me but remember the best times, the laughter, the song, the good life I lived while I was strong”.

Randall was born to the late Morris Across The Mountain and the late Rosaline (Jim) Shot Both Sides on February 1, 1965 in Cardston, AB. He is survived by his best friend and loving wife of 21 years, Corina. Children; Monte (Winter) and Lacey. His grandchildren; Carson, Michelle, Bethanee, Macey, and twins; Jakalyn & Alistar. Randall was blessed and thankful for given the opportunity to be a grandpa especially to Bethanee and Macey and spoke proudly of the grandpa duties he would do; drop and pick them up from school, their visits to grandpa’s house, or just hanging out with him.

Randall was a person who carried himself with confidence and strength, yet caring and gentle in his ways. He enjoyed the simple things in life, his friendly and outgoing nature allowed him to have many friends. He was creative in his intelligence which gave him many opportunities in life as he excelled in school and received numerous academic awards. He loved to read, had a profound love for music and taught himself to play the electric guitar. Randall’s strongest character strength was his quick witted humour as he loved to make others feel good by entertaining them with his jokes and Blackfoot stories. It also helped him through his stress especially during his time of sickness.

Randall lived on the Blood Reserve throughout his life except for a brief time he lived in Edmonton with his sister Virginia where he helped with her children. He attended elementary school in Glenwood and Magrath. His Jr and Sr. High were completed at St. Mary’s School on the Blood Reserve where he also attended the Residential school. He worked in various locations throughout his life; Galt Museum, St. Mary’s Dam Construction, Elrich Tire, Canadian Tire, constructed man made pond at Paradise Canyon, but his most proud endeavour was being the manager at the Big K Records in the Centre Village Mall, Leth, AB. In his teen years he had a motorcycle gang which included Robbie Russell, Julius Spear Chief, Shaun Bull Shields, Kenneth Knife, Delbert Young Pine, Shaun & Virgil Reeves. He loved hockey. His favourite team was the Calgary Flames and he also played hockey and football in his younger years. He also loved playing hockey when mom had family dinners, his brothers and nephews would play all day if they could but that came to a stop when mom banned it because one of his brother’s goon style of hockey. He loved hunting with his cousins Clarence and Jr. Hoof. In his later years he settled down and loved to spend every moment with his best friend and wife, Corina They lived life to the fullest as a couple and brought out the best in each other.

We would like to apologize if we may have missed any family or friends. We would like to thank Dr. Taylor and St. Mike’s Palliative Care Dr’s and staff. You were so kind & patient in Randall’s journey

A Wake Service will be at the Senator Gladstone Hall, Blood Reserve on Friday, Oct. 20th from 7:00 – 11:00 p.m.. The Funeral Mass will be held at St. Mary’s Catholic Church, Blood Reserve on Saturday, Oct. 21st at 11:00 a.m. Interment at Randall Black Plume’s homestead.