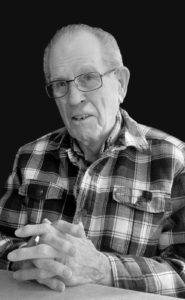 John (Jack) Porter Foster, beloved husband of the late Beatrice May Foster, peacefully passed away surrounded by his children at the Chinook Regional Hospital on Tuesday, October 17, 2017 at the age of 94 years.

Jack was born on August 13, 1923 in Moose Jaw, Saskatchewan. He attended elementary and high schools there and at age 17 enlisted in the Royal Canadian Air Force. The next four years were spent training, first as an Air Mechanic and then as an Air Crew Flight Engineer. Following his years of service, Jack worked for a brief while with the Canadian Pacific Railway which brought him to Lethbridge where he met his future wife Beatrice May Livingstone.

Initially working for Wheelers Jewellers, Jack eventually established his own store – Foster’s Jewellery, later to become Foster and Sons Jewellers. A man with a dedicated work ethic, he devoted his professional years to building the reputation of the store as a destination for premier jewellery and superior customer service. As a result, generations of customers returned time and again to purchase engagement rings, wedding rings and watches. Customers often asked to “speak with Jack” – he was recognized as a man of his word and these regulars often became lifelong friends.

Jack was a Lethbridge man at heart and his civic mindedness led him to join the Masons, the Shriners and the Rotary Club. He was actively involved in the Downtown Business Association and served for a period of time for both the Police Commission and Southminster United Church. Jack retired from business in 1983 and his son Neil and grandson David proudly continue the Foster family legacy at the downtown store.

During their golden years Jack and Bea enjoyed many happy summers at their Rosen Lake, BC cabin. Not too long after, they became snowbirds, living in Arizona in the winters and enjoying summers in the Kootenays.

After Bea’s passing in 2009, Jack enjoyed summers and holidays at Susie’s cottage and Sunday dinner at Peggy’s family home.

In essence Jack was very much a family man. He loved his dear Bea (Precious), had a special way with newborn babies and enjoyed being surrounded by his large family of kids, grandkids and in recent years great grandkids. He was always up for a chat, and ever the jokester, upon reading the daily obituaries he would ask — “Am I in there yet?” Well, sadly Dad, after 94 years, today you are.

We love you dearly and will miss you forever.

Flowers are gratefully declined. For those who wish, donations may be made to a charity of your choice. A Celebration of Life will be held at Rosen Lake in the summer.