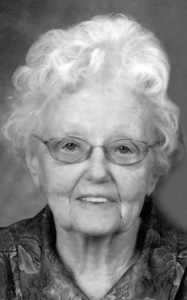 Wilma Poelman (nee DeKoning) went home to be with her savior and lord peacefully while surrounded by her family on October 29, 2017 at the age of eighty-eight. Wilma was the beloved wife of Ralph John Poelman. On October 11 of this year they had celebrated their 60th wedding anniversary, in her room at Good Samaritan Park Meadows Village. She still enjoyed a bite of cake with her family.

Wilma was born December 21, 1928 in the family home in Lynnville county, Iowa, United States. She was raised by a young widowed mother and uncle and Grandmother and aunt. It was a childhood full of hard work, and chores at a young age, she was proud of her cow milking at age 5, and she loved sleeping by young hatched chicks in the brooder house, as a child.

She loved her Iowa roots, and was proud to take that heritage into the family life she shared with her husband Ralph. They met at a young people’s convention in Lethbridge in 1957 and married soon after the convention.

Adjusting to Alberta farm life was a bit tougher than she thought, but being resilient, she strived to make a good life, one that was filled with lots of children, gardens, and blue skies.

She spent hours working tirelessly on her sewing, quilting, crocheting, and patching. She was a fabulous cook and baker. She loved preserving food, and was always trying a new idea.

Christian Reformed church life was important, but she always missed her reformed roots from Sully, Iowa. However, she was rock solid in her faith, she always knew the Lord as her personal Saviour.

She wasn’t afraid to challenge and push her family, and took great delight when her beloved children exceeded her expectations.

She was the kind of lady who said it like it was, whether you cared to hear it or not, but she was greatly admired for her tough grit and compassion. This was the lady who wasn’t afraid to adopt a passel of kids, and get her husband, and son to love them as much as she did.

Her brother and sister in laws on her husband’s side: Klaas Poelman, Jennie Williamson, William(Hetty) Poelman, and Henrietta Wierenga.

Memorial donations may be made to Kyndra’s Foundation of Love c/o Christian Stewardship Services, 214A-500 Alden Road, Markham, Ontario L3R 5H5 or a charity of choice.

One thing I ask of the Lord, this is what I seek:

that I may dwell in the house of the lord