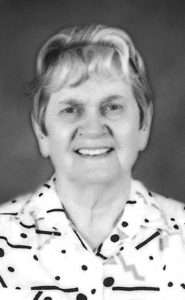 She was born on May 23, 1936 in the same little yellow house on the outskirts of Raymond in which her brothers, Joe and Bill, were born in 1931 and 1933, all in those tough depression years. Their hardworking parents labored in the sugar beet fields and they had to pull out of school their 10-year-old daughter, Ann, to take care of the younger siblings. Their father also hauled beet pulp to several farmers who were raising cattle.

By 1939, the family had a wee bit of savings that they used as an application for a very large farm loan, through Mr. Henry Schwartz, with which they invested in their one-quarter section Picture Butte farm. Mr. Schwartz helped out many farmers; he spoke their languages and kindheartedly understood their concerns.

On October 28, 1940, Margaret’s father presented her with a special gift she had been praying for – a brand new baby for the family. As the midwife was late, our “Dr. Father” did the honours himself with the help of his old country Hungarian medical books. Both Mother and Baby came through well and Margaret was ecstatic with her very own little dark-haired baby brother, Andy. They bonded as close and caring siblings with a special understanding and sharing between them. When Margaret entered the first grade at Barrhill School, she made her very first show-and-tell project her two-year-old brother. Shortly afterwards, together, they conducted a very sad funeral for their special little pet doggie “Darky.” She had been run over and killed on the road by the farm.

Years later, it would be Andy dubbing Margaret’s hubby as “Dutchie,” a title he enjoyed much more than the usual ones like “Stubborn Dutchman!”

In 1948, the family sold the Picture Butte farm and invested into a larger half-section farm just south of Barnwell, as well as a house in Lethbridge at 722 – 18th Street South. Margaret completed the seventh grade at Barrhill School and started the eighth grade at St. Basil’s in north Lethbridge, then moved onto the newly built St. Joseph’s High School in south Lethbridge.

Margaret is also survived by her sister Ann Chenger and brother Andy Vrabel, and by Gayle Wensveen, mother to Chelsey.

On John’s side, she is survived by his brothers Gerard (Terry) Westwood, Quince (Dianne) Wensveen, George (Denise) Wensveen.

In addition, Margaret is also survived by numerous nieces and nephews and their families.

On John’s side, she was predeceased by her father-in-law and mother-in-law Jacobus and Quirina Wensveen; her nephew Ian Wensveen; and sister-in-law Rita Bosch.

Back in 1958, Margaret joined the staff of St. Michael’s Hospital as a switchboard operator. The hospital atmosphere was most interesting to her and she learned a lot. As some have known, the pathways of some of Margaret’s life were not very easy; she struggled with bipolar depressive disorder and also underwent various surgeries and procedures. Coping with this cancer has been both very challenging and a new learning experience – not only for Margaret, but for her loved ones too. The following insight has given us comfort, strength and courage, and we now share it with all of you on behalf of Margaret:

“What Cancer Cannot Do:

Cancer is so limited,

It cannot invade the Soul,

It cannot conquer the Spirit.”

Following the Funeral Mass, Margaret will be laid to rest in Mountain View Cemetery.

Following the interment, relatives and friends are invited to further share this day with the family for a complimentary luncheon and refreshments in the Memorial Hall at the ROYAL CANADIAN LEGION GENERAL STEWART BRANCH NO. 4, 324 Mayor Magrath Drive South, Lethbridge, AB, through the north entrance. Music will be provided by Rich Wensveen.

In lieu of flowers, memorial tributes may be made to Streets Alive, 323-4th Street South, Lethbridge, AB T1J 1Z9.