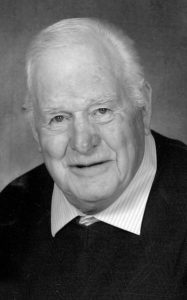 Mr. Ettienne “H” Wauters of Lethbridge, beloved husband of Mrs. Dorothy Wauters, passed away at the Chinook Regional Hospital on Monday, October 30, 2017 at the age of 86 years.

Ettienne was born in Lethbridge on October 5, 1931 to Philemon and Celina Wauters two years after they immigrated to Canada from Belgium. In 1944, his parents purchased a farm east of the Crystal Lake School, and Ettienne lived there until his passing. When his school classmates had difficulty pronouncing his first name, they gave him the nickname H that stuck with him until this day.

After graduating from high school, Ettienne completed a diploma in Practical Agriculture at the Olds School of Agriculture in 1951. He married Dorothy Morton on April 19, 1954 and started his long career on his farm. He always stepped up to help out in the community including work as a lineman for the East Lethbridge Mutual Telephone Company, a director for the Broxburn Sugar Beet Growers, and many leader positions in the Lethbridge – Coaldale 4H Beef club. He also loved to join his friends in a hockey or curling game in the winter when life on the farm was less hectic.

A Private Family Graveside Service will be held in the Mountain View Cemetery at a later date.