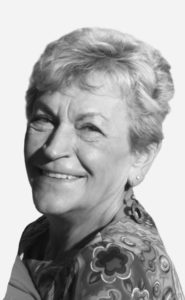 Georgina Bozsak of Lethbridge, beloved wife of the late Steve Bozsak Sr., passed away suddenly at home on November 6, 2017, at the age of 73 years.

Georgina was born in Prince Albert, Saskatchewan on August 2, 1944 to John and Marcella Harasyn. She attended school and became a Journeyman Hairstylist in 1972. Her hobbies included playing crib, gardening and gossiping on the phone (lol).

Left to mourn her loving memory are her son, Steve Bozsak Jr.; sisters, Helen and Nelly; brothers, Jack and Johnny; her boyfriend, Mike; numerous nieces, nephews and their families and the lovely “Granddog” Jersey.

Georgina was predeceased by her loving husband, Steve Bozsak Sr.

Flowers are gratefully declined. For those who wish, you can make a donation to the SPCA Humane Society, 2920 – 16th Ave N, Lethbridge, Alberta.