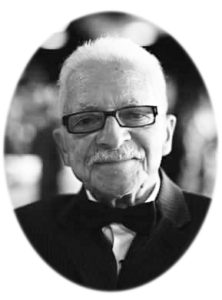 Silvio Mauro, beloved husband of the late Rosina Mauro, passed away peacefully in the loving arms of his family at St. Michael’s Health Centre, on Wednesday, November 8th, 2017 at the age of 93 years.

Born in the hamlet of Grimaldi, in the province of Cosenza, Italy, on March 12, 1924, he was the third child to Angelo and Anna. From the beginning, Silvio was taught a devotion to God, the value of family and his Italian traditions. Having his Father immigrate as a young boy played a significant role in Silvio’s life. He was primarily raised by his Mother and often spoke of his relationship with her. She had a huge impact on creating the man he was and leaving him with the solid foundation of loving every human being and to always bring happiness to their lives. Although countries separated him and his Father, it was he that built his stature, respect, values and dignity. His Dad’s sacrifice taught Silvio what it meant to strive for the best life for his family. Silvio was a cabinet maker by trade. At the age of 23, Silvio married the love of his life, Rosina Vercillo and they started their family. He made the decision in 1951 to follow in his Father’s footsteps and immigrated to Canada without his family to create a better life for them. His wife and two young boys were reunited with him in 1954 in Trail, B.C. Shortly after, they moved to Lethbridge where they raised their four children and where he resided until his passing. His strength, determination and strong faith in God are what guided him through life’s journey. Silvio demonstrated his strong faith by his conviction to the rosary by having them throughout his home and around his neck. This was his way of fulfilling his testament.

Silvio was a hardworking, devoted, nurturing husband, papa, nanno and cata nanno. He enjoyed spending time with his family, friends and especially the little ones. He continued with his Wife’s qualities of taking great pleasure in creating a home full of hospitality and wonderful “Silvio style” homemade meals. The most important part of his life was his family. He strived to create a life full of love, laughter, and strong family values. Silvio also established a vast circle of friends.

Silvio loved to entertain, had endless stories and welcomed everyone into his home. His ability to find joy in every situation was displayed through his spontaneous dancing and singing; without rehearsal. His sense of humour and playfulness were what attracted people to him. When in Silvio’s company, no matter who you were, no matter what age or status, his charismatic demeanor was engaging. He had a special, natural power that gave him the ability to influence other people and attract their attention and admiration.

Silvio was a founding member of the Lethbridge Italian Canadian Culture Center. He was a 4th degree Knight and was always honoured to serve at masses.

Silvio left an imprint on everyone who was lucky enough to spend time with him. We are all forever changed because of this kind-hearted man. Ti amo per sempre.

The family requests that you please include your favorite memory of Silvio in your condolence.