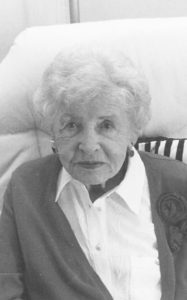 Born in Mickelsdorf, Poland, November 4, 1925, Kay was the daughter of Rudolph and Olga Kunstman. They immigrated to Canada in 1929 and settled in Stettler, Alberta. After completing High School, Kay moved to Calgary, where she worked, then later married Ken Bernie and they had four children. In 1952 they made their home in Lethbridge. Kay worked in Retail and then for Sears. She retired at age 59.

Kay also spent time in Foremost, where she made many lasting friendships. In Lethbridge she became involved in the community volunteering for Girl Guides, Meal on Wheels, Ten Thousand Villages, and the Seniors Center. Kay was always willing to lend a helping hand to anyone in need. Kay also resumed her love of oil painting and her passion for golf. She began to play bridge and looked forward to her weekly games with her group of friends. Kay also loved to cook and bake which she did until her passing. She was also an avid reader and always up to date with current events, ready to debate any topic with anyone.

But Kay’s greatest love and joy stemmed from her four children and their families. Her grandchildren and great-grandchildren meant a lot to her. Kay lived a long and fruitful life, selfless, generous, and always grateful. She will be deeply missed and lovingly remembered.

Kay was predeceased by her parents Rudolph and Olga, her husband Ken, and sisters Lil and Elsie. She is survived by brothers Art Kunstman and Garry (Gail) Kunstman from Stettler and Ron (Fay) Kunstman from Whiterock, BC.

Left to cherish her memory are her sons David (Kathie), Bob (Barb) and daughters Debbie (Eldon) Simpson, Val (Charlie) Barton. Also 6 grandchildren and 4 great-grandchildren, nieces and nephews and cousins in Poland and Germany.

A private family service will take place at a later date. For those who wish, donations may be made at a charity of your choice.

One Condolence for “BERNIE, Kay”